Ivan Keller is one of those six-string talents that you should keep an eye on for the coming years. Hailing from Croatia, the young guitarist started out with a couple of bands until starting to get mainstream attention with the short-lived group Animal Drive, joining the ranks with vocalist Dino Jelusick.

Nowadays, Ivan is playing on Dino’s solo band and a few months ago they published a song, Healer, which did pretty well for them. He’s also playing for renowned bassist Marco Mendoza’s solo band and currently on tour with him, I had the opportunity of talking with Ivan and we talked about a wide variety of topics. It was a really nice talk and Ivan is a gentleman, so I hope you enjoy it. 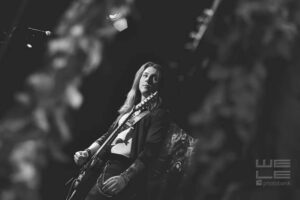 First and foremost, thank you for taking the time for doing this interview, Ivan. How’s it going?

Hey, thank you for the inquiry, I appreciate it. I’m having a few days off to charge my batteries and prepare myself for upcoming shows.

How’s the tour with Marco Mendoza going so far?

Really good. We play almost every day, visiting new places and meeting new people all the time. It’s exciting and I’m grateful for every good experience I’ve had.

What has been the best aspect of this tour for you?

The thing I love the most is when they recognize your talent and effort. Everyone knows who Marco is but to many people I am the new guy. And it’s really awesome to see that satisfied and happy look on people’s faces while I’m performing. And when they come to you after the show and still can’t belive what they just saw. That’s just priceless. It just gives you more faith in yourself.

Let’s go back to the beginning and do the typical question: How did you get into music when you were younger?

I became a music fan when I was like nine years old. We had some older friends who supplied us with cassettes, CDs, posters and stuff. So when they got into playing music later, they just pulled my crew and me there. My friend bought some cheap classical guitar and then we all started to play.

Who were the artists and albums that influenced your musical views the most?

It first started with Nu Metal because that was the most popular music when I was a kid. We were listening to bands like Slipknot, Korn, Linkin Park, SOAD, Bloodhound Gang. We were listening mostly their debut albums and they are still my favorites. Then later when I started to play, I was more into AC/DC, Guns and Roses, Whitesnake, Bryan Adams, Iron Maiden… I think the Back in Black album was the game-changer. I loved Angus Young so much. I was learning his solos on that bad classical guitar which was really hard to do haha. Later I was more into Slash, Doug Aldrich, Zakk Wylde, Steve Vai and all the shreders.

How do you think you have changed as a guitar player over the years?

Well I’m not going back, that’s for sure. Just forward. When I hear something I’ve recorded few years ago, I always think that I would do it so much better now. It’s always like that and I think that’s the way to go. I think I’ve found my style and I’ll just go with that because it works.

What do you think are the aspects of being a guitar player that are not discussed enough?

Stage performance. It’s not everything about playing. When you are on stage, you must be THE man. There are lots of players who are good at shredding at home, but they never set foot on the stage and they never will.

When you’re writing music, what are you going for? What is your goal as a songwriter?

I’m in charge for guitar parts. I work with Dino Jelusick (who’s a member of Whitesnake now) and he’s the best songwriter I know. So when he writes a song, I’m trying to create the best rythm and solo parts for the song. And he’s always happy with my ideas so it works the best like that. 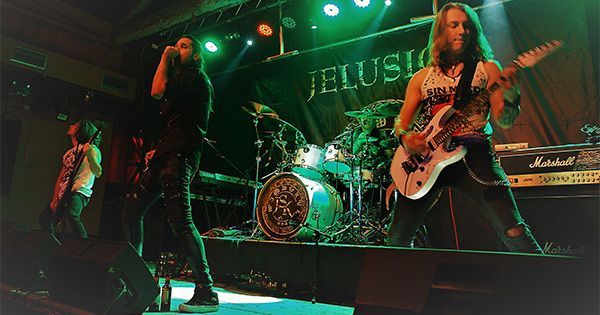 Obviously, you hail from Croatia. For a lot of us that are not so familiar with the Rock scene there, what can you tell us about it?

We have a lot of great bands there. Like world class quality. And we also have a lot of Rock/Metal fans. What we don’t have is a decent music television or something that would give some kind of exposure to them. So I understand that sometimes it’s hard to keep going like that. That’s such a shame.

Would you agree with this assessment of mine that the internet has helped musicians such as you and your bandmate, Dino Jelusick, who come from non-traditional countries when it comes to Rock music, to gain more exposure?

If you don’t have it in yourself, all the internet in the world can’t help you. Dino was always a rockstar and he spent many many years trying and working. He did dozens of albums, someone doesn’t have that much music in his life career. And he’s not even 30. Internet has helped but it was just a matter of time when something great would happen to him.

Speaking of Dino, you guys all the way back. How did you guys meet and started working together?

We met in 2010 when he was having a gig in my hometown (Valpovo). We jammed and he saw something in me right away. 5 years after that, when I moved to Zagreb, he needed a guitar player for upcoming shows. I was in the band as soon as I got there.

I know that, unfortunately, Animal Drive had a sad ending, but the work you did with that group was really good. Looking back now, what do you think about that Bite! album?

Thanks, man! I’m still proud of that. That was my first album ever released. Really cool songs and we played them with balls.

You obviously played with Dino recently, in the Healer song. What can you tell us about the making of that track?

Well, Dino sent me a demo. As soon as I started to jam along, I’ve got a better idea for the main riff and some other parts. Mario nailed his drum parts, Luka nailed his bass parts and that was it. Is there any chance we say see you with your own project in the coming years?

I’m definitely planning to do my solo album. And after that I’ll see what I can do. I won’t promise anything but I would really love to play it live. I’ll just have to see where it goes.

What do you have in store for the near future?

After I finish my tour with Marco, I’m gonna focus on homework. Writing riffs, solos and stuff. I already have many ideas I need to finish.

Thank you for taking the time to do this, Ivan. It was a pleasure. Any last words for our readers? Where can people follow you in social media?

Thank you man, it was my pleasure. They can follow me on Instagram and Facebook. Last words to readers: Thanks to everyone who took the time to read this interview and I hope we’ll see each other somewhere on the road soon. Stay safe.